My illustrations Send in the Clowns, I’m With Stupid, and FU Dice will be featured in James Gunn’s Sparky and Mikaela for XBOX Live “Horror Directors Do Comedy” series. Gunn says, “Sparky and Mikaela is the story of a raccoon/human superhero team. They fight crime in both the forest world and in the world of human beings. I think of it as my first “message” piece.

After generations of us humans warring with our natural enemies, raccoons, it’s a plea for us all to just get along. It’s also a plea for more shows with girls wearing sexy superhero outfits fighting along Muppet-type procyonids.” Sparky and Mikaela will debut on XBOX LIVE on December 24th. Just a few weeks after XBOX LIVE it will go to MSN.com and Zune, and will thereafter be available in numerous other places on the web, TV, and DVD. Unlike the XBox version, some of these versions will be the Director’s Cut — uncensored, pure, and untouched. 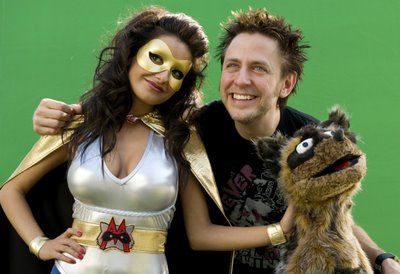 All photos by VANCE. Poster by Marci Holmes.

The XBOX Live series features comedy shorts by horror directors, including Slither’s James Gunn, Saw’s James Wan, Hard Candy and 30 Days of Night’s David Slade, Hatchett’s Adam Green, May’s Lucky McKee, Amityville Horror’s Andrew Douglas, and more. “Almost every director we approached wanted to do this to show their comedic vision,” Safran Digital Group CEO Peter Safran said. “Most of these guys know the Xbox demographic are also big fans of horror and the supernatural and realized this was the platform where they should be.”